The European Marine Board is the leading European think-tank in marine science policy. We facilitate the transfer of the best scientific knowledge available to the core of marine research policy. 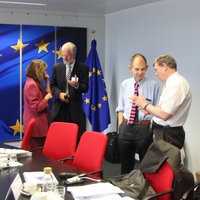 Our science policy facilitation is provided by interacting directly with decision makers, and steering discussions between scientists and policy makers on various relevant topics. We represent the European marine scientific community at different events and our network is our primary pool of experts. European Marine Board is recognised as a Observer Organisation to the Intergovernmental Panel on Climate Change (IPCC) and as a Stakeholder Organisation at the European Commission's Expert Group on Strategic Coordination for the Marine Strategy Framework Directive (Marine Strategy Coordination Group). The Executive Director is member of several Advisory Committees from projects and initiatives, and we develop short statements and responses to policy developments and consulations.

In addition to our regular events (EMB Forums, EurOCEAN conferences, EMB Plenary Meetings), we organise other activities to assist the interaction between marine science and policy, namely:

The Directors from EMB's member institutes met on several occasions with Commission Vella to to exchange ideas as to how marine research could contribute towards the EU's marine policy goals for items such as blue growth, ocean observations and governance. As from 2016, 3 meetings have taken place:

On 10 July 2018, EMB member organisations met with Commissioner Vella on a third occasion to discuss relevant marine science topics such as the SAM report on Food from the Oceans, the preparations for the United Nations Decade of Ocean Science for Sustainable Development (2021-2030), and future marine research priorities for the upcoming EU Research and Innovation Framework Programme Horizon Europe. The outcomes of this meeting are available in:

On 8 July 2016, Commissioner Vella and his team came down to the EMB offices in Ostend to discuss how to consolidate Europe's ocean observing and seabed mapping activities into a sustainable and efficient process. Read all about the outcomes of the meeting on:

The initial meeting with the Research Directors and Commissioner Vella discussed topics such as blue growth, climate change, research priorities, sustainable funding, observation and mapping. The outcomes of this meeting and the presentations are available on the Commission website. You can also find more info in the EMB news item.

Professor Doug Connelly is the Associate Director for Research at the National Oceanography Centre in the UK. His presentation is titled "Assuring the integrity of offshore Carbon Capture and Storage" and it will link to the last large EU project he coordinated, the STEMM-CCS (Strategies for Environmental Monitoring of Marine Carbon Capture and Storage). This project looked at using existing and newly developed approaches for monitoring offshore carbon capture and storage reservoirs.

You can find more about this event and register here.

On Monday 13 June 2022, EMB hosted its 5th Brown Bag Lunch on the topic of "Offshore freshened Groundwater: An unconventional water resource in coastal regions". This event includes lunch, offered by EMB, followed by a presentation from Prof. Aaron Micallef, Senior Scientist at the GEOMAR Helmholtz Centre in Kiel, Germany, and ended with an interactive discussion. The event took place at the Scotland House in Brussels.

Freshwater resources in coastal regions are under enormous stress due to population growth, pollution, climate change and political conflicts, and many coastal cities have already suffered extreme water shortages (e.g. Cape Town, Chennai, Sao Paolo, Shanghai). Offshore freshened groundwater (OFG) has been proposed as an alternative source of freshwater to relieve water scarcity, provide a buffer to increased demand during periods of intense drought, and mitigate the adverse effects of groundwater depletion and climate change. There is an urgent need to identify where OFG is located and in which volumes, delineate the most appropriate approaches to characterise OFG, identify the most cost-effective strategy to utilise this resource, and assess the environmental and legal challenges to sustainable OFG use. During this event Prof. Micallef outlined a roadmap to address these needs and transform Europe into a global leader in OFG utilisation. A recording of the talk by Prof. Micallef can be viewed here and you can find out more here.

EMB hosted its 4th Brown Bag Lunch on 14 February 2020 on the topic of "Blue Carbon". Blue Carbon refers to organic carbon that is captured and stored by the oceans and coastal ecosystems.  In particular, the vegetated coastal ecosystems of seagrass meadows, tidal marshes, and mangrove forests sequester and store more carbon per unit area than terrestrial forests and are now being recognised for their role in mitigating climate change. Prof. Hilary Kennedy from the University of Bangor (UK) is one of the leading experts in Europe on this topic and she provided some insight on the latest developments in this field.

The Blue Carbon Ecosystems have caught the attention of diverse stakeholders outside the scientific community, as it can play a crucial role in many societal challenges, not only through their potential to mitigate climate change, but also by providing coastal protection and fisheries enhancement. Therefore it is crucial to address knowledge gaps and uncertainties relating to this topic to further inform conservation and private sector organizations, governments, and intergovernmental bodies committed to marine conservation and climate change mitigation and adaptation. Prof Kennedy touched upon some key questions and challenges that need to be addressed to consolidate progress in Blue Carbon science to inform current the debate and set future research agenda's. Her presentation was followed by an interactive discussion on this topic with the speaker and the participants. The presentation given is available here, and a recording of the talk by Prof. Kennedy can be viewed here.

2 October 2019: Why marine stations are essential to address societal challenges?

EMB organized it's 3rd Brown Bag Lunch session on the role of marine stations in the 21st century and how they contribute to address the societal challenges. Dr. Matthew Frost, MBA Deputy Director and President of the European Network of Marine Stations (MARS) started the conversation on this topic by highlighting the importance of biological observations and the work that is done in marine stations. The event took place at the Royal Belgian Institute of Natural Sciences in Brussels in the VIP room. Address: Vautierstreet 29, 1000 Brussels. The presentation from Matthew Frost is available here. Please note that the pictures used in the presentation are credited to the rightful owner as far as they are known to the autor of the presentation. The presenter does not claim any uncredited pictures, but would like to attribute them to the rightful owners.

6 February 2019: Ecosystem-based management and the role of MSP

The second EMB Brown Bag Lunch was held on 6 February 2019 alongside the ExCom meeting, at the BELSPO offices in Brussels. Vanessa Stelzenmüller (Thünen Institute, Bremerhaven) gave a talk on "Ecosystem-based management and the role of MSP", and this was followed by an informal discussion between the participants. The event, for which over 30 people registered, was attended by a mix of people for marine networks, NGO's and the European Commission, and was well received. EMB intends to hold 2 Brown Bag Lunch events each year, on different topics of importance to the marine community.

The European Marine Board’s Policy Brief 6 ‘Navigating the Future V: Recommendations for the Ocean Decade’ was launched at European Parliament on 19th November 2019 organized by the European Bureau for Conservation and Development. The event was focused on all SDG's and brought together more than 150 participants, ranging from policy-makers, the private sector and NGOs to jointly discuss the key environmental challenges ahead and, moreover, the crucial importance of delivering the SDGs.

The main conclusions from the EMB Brief ‘Navigating the Future V: Recommendations for the Ocean Decade’ were presented by Anne-Marie Tréguier, one of the authors of NFV. The EMB chair, Gilles Lericolais chaired the second half of the session. The policy brief provides recommendations developed by European experts to ensure that ocean science supports and guides the implementation of the SDGs, which is the focus of the UN Decade of Ocean Science for Sustainability (2021-2030). An increased use of ocean resources is required to achieve the SDGs and this must be done within the context of protecting biodiversity and ecosystem services to ensure their long-term sustainability.

A picture report from the event is available here.

On Wednesday 3 April, over 50 participants and speakers from across Europe gathered in the European Parliament to attend the launch of EMB's 5th Future Science Brief on 'Valuing Marine Ecosystem Services'. The speakers and participants discussed how to better account for and integrate values stemming from Marine Ecosystem Services into marine management and policy decisions. Working Group Chair Melanie Austen and EMB Executive Director Sheila Heymans handed over the first printed copies to the hosts of the event: MEP's Gessine Meissner (Germany) and Ricardo Serrão Santos (Portugal).

The event was co-organized by the SEARICA Parliamentary Intergroup and the European Marine Board (EMB). The event agenda, the speakers' presentations and pictures from the event can be found on the SEARICA website. The picture report from the event is available here.

In September 2018, EMB and the SEARICA European Parliamentary Intergroup jointly organized a European Parliament event on “Young Talent and the Blue Economy - Towards a fit-for-purpose training for marine graduates”. This event followed the launch of the European Marine Board publication "Training the 21st Century Marine Professional" in April 2018, and provided an opportunity to take steps towards implementing the recommendations made there. The event was hosted by MEPs Gessine Meissner and Ricardo Serrão Santos and was attended by over 50 participants from a range of backgrounds. The programme included speakers from academia, industry, policy and most importantly, current students.

Find out more about the outcomes of the event in the full picture report and on the EMB Working Group website: http://www.marineboard.eu/marine-graduate-training.

In 2016, after a successful brainstorming workshop, EuroGOOS and European Marine Board convened an expert panel acting as EOOS Steering Group. The Steering Group has developed a consultation document to collect feedback for the EOOS implementation roadmap and launch it for a wide stakeholder consultation.  On 8 September 2016, the EOOS progress and the consultation document, prepared by EMB, were presented at a dedicated event at the European Parliament hosted by MEP Ricardo Serrão Santos. The main outcomes of this event are available here and on the EuroGOOS website. Read also the EMB news item on the event.

In the context of the COP21 talks, EMB organized its 5th Forum in the European Parliamant, hosted by MEP Ricardo Serrão Santos, to discuss the Ocean-Climate Nexus and the critical role of ocean science as part of the societal response to climate change. The outcomes from this Forum are: