Lera Litvinova will open her exhibition “Renaissance” on August 26 at 17:00 at the Museum of Outstanding Figures of Ukrainian Culture (Lesya Ukrainka, Mykola Lysenko, Mykhailo Starytskyi, Panas Saksaganskyi) in Kyiv. At the exhibition, viewers will be able to see art objects related to Lera Litvinova's series of works ‘Under the Surface’, created as part of the EMBracing the Ocean residency. The exhibition is dedicated to the study of the impact of Russia's actions on the territory of Ukraine on the Black Sea. 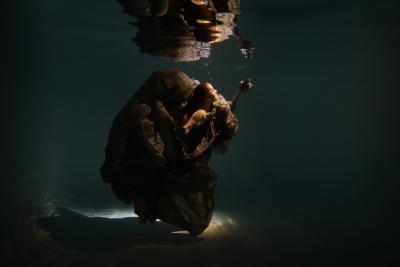 The exhibition "Renaissance" is dedicated to the study of the impact of Russia's actions on the territory of Ukraine on the Black Sea. "More and more often in private conversations with ecologists, I hear the word "ecocide" in relation to the territory of Ukraine. The fragile ecosystem of the Black Sea, its uniqueness requires special attention to ensure balance in nature. I hear from researchers how access to the collection of information to analyze the consequences of ecosystem destruction is being made impossible. So what is the present and possible future for the Black Sea?" says Lera Litvinova. In 2014, the war began. The beginning was hostilities in the East of Ukraine and the annexation of Crimea. Now the war has reached new territories. In addition to undoubtedly large losses among the population, the destruction of lives and the destruction of culture, the aggressor also destroys nature.

At the exhibition, viewers will be able to see art objects related to Lera Litvinova's series of works Under the Surface, created as part of the EMBracing the Ocean artist-in-residence programme, which is an activity of the UN Decade of Ocean Science for Sustainable Development. The project is also an activity of the EU Mission Restore our Ocean and Waters.

The curator of the project, Leonora Janko, notes "the Renaissance period was a revival in art of both ancient classical pure forms and corresponding concepts. It was then that a worldview and concept of humanism, new for those times, emerged. It was the humanists who talked about the harmony of the world and development. It is during this period that a person rises to the level of a creator, and this means an increase in human responsibility. Parallels with the Renaissance in art arose as an idea that right now is the time when it is necessary to look back and take the best as a model, to remember the originality, the purity of the seas and oceans, which we are losing, and to turn the possibilities of science and art into the revival of these natural resources. The implementation of Lera Litvinova's project is a dialogue between art and science."

Olena Marushevska, communications expert of the EU-UNDP EU4EMBLAS project, states "the war showed how important our Sea is for the whole world. After all, it is through this that the importantance for the prevention of hunger on our planet are the ways of supplying Ukrainian grain to African countries and beyond has been highlighted. The war also showed how emotionally attached we all are to the Sea and how difficult it is to imagine life without the Sea. Thanks to art actions, such as "Renaissance", we can "exhale" these emotions, for which we are very grateful to the organizers".

Evgeny Dykiy, marine biologist, also shares that "after the war, after our victory, we will be forced to treat not only human wounds, but also ecosystems wounded by the war, both on land and in the sea. The Russians will pay us for this, through reparations. But to expose them accounts, and in order to develop a program to restore the crippled nature, we will first need to understand in detail exactly how the war damaged our sea, which parts of the ecosystems survived better and which were the most damaged. So immediately after the end of the war, we will start a big program to determine the state of the Black and Azov seas , to diagnose their "diseases" and assess the necessary "treatment".