Lera Litvinova is a Ukrainian visual artist and art curator, who EMB is supporting with an additional EMBracing the Ocean grant as support to Ukraine during the current crisis. Lera is the founder of Lera Litvinova Gallery in Kyiv. She supports an active position in the development of Ukrainian culture, and is a participant and curator of social projects actively implementing the principle of cultural diplomacy to strengthen cultural relations. 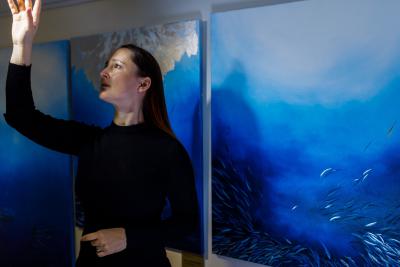 As an EMBracing the Ocean artist, she is creating new work co-designed with various scientists (including from DOORS, BRIDGE and EMBLAS projects) to look at the impact of the war on marine pollution in the Black Sea as part of her Under the Surface project. This project investigates the influence of the military actions on Black Sea ecosystems and sustainable development. She will look at questions including: what consequences will war bring to marine life in the Black Sea and Sea of Azov? How will cities will be reconstructed, and can we rebuild with a new attitude towards nature? She is developing paintings and installations built on objects found in rivers and seas that play significant roles in marine pollution. The work aims to bring the consequences of the war on marine pollution to the attention of the public. It enables an honest dialogue with viewers on changes in ecology and society, and possibilities of restoration of both cities and underwater life.

Lera Litvinova opened her exhibition “Renaissance” on August 26 at 17:00 at the Museum of Outstanding Figures of Ukrainian Culture (Lesya Ukrainka, Mykola Lysenko, Mykhailo Starytskyi, Panas Saksaganskyi) in Kyiv. At the exhibition, viewers can view art objects related to Lera Litvinova's series of works ‘Under the Surface’, created as part of the EMBracing the Ocean residency, including a ceramic installation and written information developed in collaboration with the scientists. The exhibition is dedicated to the study of the impact of Russia's actions on the territory of Ukraine on the Black Sea and runs from August 26 to October 26 2022 from 10:00 – 17:00 Wednesday to Sunday. Find out more here.

A second exhibition is planned for spring 2023 and will be based on additional scientific information and include paintings, videos and artifacts from the Black Sea.

Lera's previous work within 'Under the Surface' includes a series paintings on  schooling fish, reminding audiences of the fragility of the world and ecosystems, and the need to come together to tackle environmental issues. She has also worked on projects focusing on Peace and Ukrainian democracy during which she cooperated with Ukrainian Embassies in Germany, Belgium and Flanders Department of Foreign Affairs, Mauermuseum - Museumhaus am Checkpoint Charlie and other сultural Instututions. Her exhibitions have reached audiences of more than 50,000 visitors.

Action for Mission Restore our Ocean and waters

This project has been submitted as an action towards achieving the objectives of the European Commissions Mission Restore our Ocean and Seas,  contributing to all three of the Mission Ocean objectives: "Protect and restore marine and freshwater ecosystems and biodiversity", "Prevent and eliminate pollution of our Ocean and waters" and "Make the sustainable blue economy carbon-neutral and circular", and the “Public mobilisation and engagement” enabler. Lera’s thoughts on the Mission are reflected in the text below.

Imagine a fragile glass bridge. You walk on it, but you do not see its end. Look down, through hundreds of meters, everything below takes on only a general outline. The details that fill the world below you disappear. Only the landscape is visible, in which one cannot see the diversity of plants, animals, birds and, especially, insects, inhabitants of the seas and oceans. But, of course, you can see traces of human presence. Roads, factories, an ordered system of buildings, a graphic grid of sown fields - all this will inextricably remind you of the scale of human activity. We replace the self-recreating ordered chaos of nature with the structured and stingy monotony of the needs of the mass consumer. In the fight against pollution, the most important thing is to realize that we cannot compete with nature. Our possibilities are small in terms of recreation and huge in terms of the destructive consequences of indiscriminate consumption. Scientists say that 80% of marine pollution comes from land (UNEP 2006). But, to put it bluntly, all 100% of pollution is formed by people living on land.

Again I will ask you to imagine yourself on the bridge. There is only you, the bridge and the beautiful landscape that you can see from a bird's eye view. How beautiful and how far away is the mysterious world below, isn't it? The same huge distance is between a person standing on a bridge and the awareness of the real consequences of his actions, which are directly related to environmental pollution.

The main task in the fight against pollution and the prevention of pollution is to work with the consciousness, first of all, of government officials, business owners, opinion leaders and the younger generation. After all, the most important struggle takes place in the hearts and minds of people.