On 18 and 19 October 2022, the EMB Working Group on Ocean Oxygen met for the second time in a hybrid meeting that was held in person at the new InnovOcean site in Ostende (Belgium) and online. The meeting was chaired by the Working Group Chairs Marilaure Grégoire (University of Liège, Belgium) and Andreas Oschlies (GEOMAR, Germany). 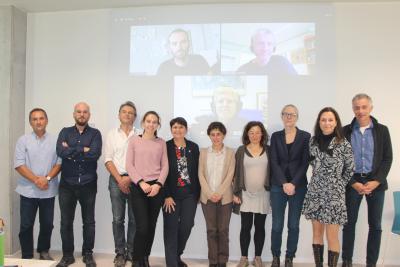 The EMB Working Group on Ocean Oxygen kicked off on 21 and 22 June 2022. The aim of this Working Group is to write a Future Science Brief on the topic of Ocean Oxygen. The Science Brief will explain the science behind the statement ‘every second breath comes from the Ocean’ and communicate the threat of Ocean deoxygenation, which is heavily under-communicated. Specific topics will include the history of the oxygen cycle on Earth, the modern oxygen cycle, current Ocean deoxygenation, as well as knowledge gaps and recommendations. The Future Science Brief is expected to be published in summer 2023.

The second hybrid meeting was a success. The Working Group advanced considerably in the development of the document and developed a first draft of key recommendations.

The Working Group members are:

The Working Group is receiving communication support from Jan Seys (VLIZ, Belgium), who is part of the EMB Communication Panel.

You can find out more about this working group here.